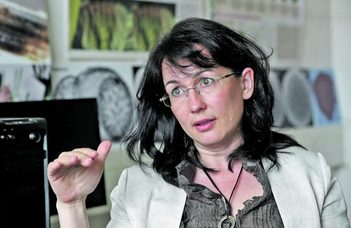 Abstract: The composition of the past vegetation and its changes can be inferred from morphological and quantitative studies of fossil pollen grains preserved in lake and mire sediments. The cell wall of pollen grains is made up of a sporopollenin (a chitin-like substance) that resists degradation in anoxic environment, while its eye-catching pattern is mostly species-specific, allowing plants to be identified at species, genus or family level. Vegetation changes during the Ice Ages (the last 2.6 million years of Earth's history) give an indirect picture of past climate changes. Using the principle of actualism, the temporal variation of pollen assemblages can be used to quantify pas temperature, precipitation and evaporation changes, and the number of such studies have been increasing worldwide in recent years. In this presentation, I present the results of several pollen based climate reconstructions from the Carpathian Region covering the last glacial termination period, when the amplitude of warming exceeded or was of similar magnitude than the global warming witnessed today. I will take you through several examples of how rapid warming and cooling periods have influenced megafauna and prehistoric societies in East-Central Europe with special emphasis on the Carpathian Basin’s local climate that often showed attenuated change relative to NW Europe. I will demonstrate how and when the Late Pleistocene megafauna went extinct, how Middle and Late Neolithic societies were affected by climate change and what was the role of climate in the westward migration of Yamnaya, Pre-scythian and Scythian nomadic groups from Crimea at c. 5300 and 3000 years ago. I will also demonstrate how other proxy methods (e.g. stable isotopes, ancient DNA, diatom and chironomid studies) can be used to create multi-proxy reconstruction of past rapid environmental changes using the example of our South Carpathian high mountain lake sediment studies.