Experimental study of the functions of zebra stripes: a new thermophysiological explanation 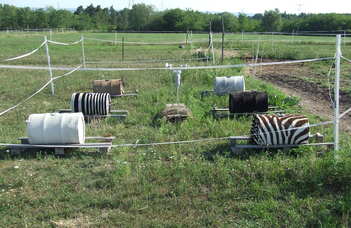 The adaptive benefits of zebra stripes have been disputed since Wallace (1867) and Darwin (1871), but among the 18 existing theories, only 1 is experimentally confirmed, namely the visual parasite (tsetsefly and horsefly) repellence of zebra stripes. We demonstrated that dark host animals are much more attractive to horseflies than bright ones, and animals with striped/spotted fur patterns are horsefly-repellent. The reasons of these are unknown. Here we present a new thermophysiological explanation: On hosts with dark and thus in sunshine warm coat, horseflies can easier find blood vessels by means of vein-generated temperature gradients due to the lack of other disturbing heat gradients, and during blood sucking they can fly away faster from the backlash of hosts, because due to the warmer microclimate their wing muscles can function quicker. On hosts with inhomogeneous coats it is difficult to find veins by thermoreception because of disturbing heat gradients at the borders of stripes/spots. The surface temperature of bright hosts is not high enough, even in sunshine, to ensure the quick functioning of wing muscles necessary to a successful escape from the host’s backlash. We test this with horseflies, horses, cattle, zoo zebras, and in field observations, experiments and measurements performed with test surfaces of different optical/thermal characteristics. We also test experimentally the theory of the alleged cooling effect of zebra stripes because of convective air eddies with measurements using thermocamera and Schlieren-technique, and with thermodynamical measurements of host animal models. This research is supported by the Hungarian grant NKFIH 123930.