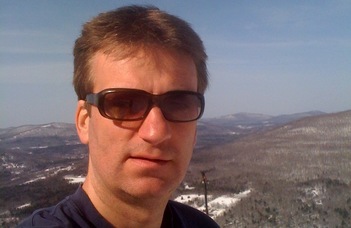 Astronomers have found that most major galaxie harbor supermassive black holes (SMBHs) at their centers, with masses between a million to a billion times that of the Sun.  Galaxies are also known to often collide and merge, creating compact SMBH binaries.  These binaries are not directly resolvable by conventional electromagnetic telescopes, and observational evidence for their existence remains elusive. However, they are sources of strong gravitational waves (GWs), which can be detected in the future, e.g. by instruments such as the space-based interferometer LISA.  Identifying the host galaxies of these GW sources is a major goal of astrophysics and cosmology, which would allow us to track the role of mergers versus gas accretion in the build-up of massive black holes over cosmic time, and provide novel tests of general relativity on large distance scales.  In this talk, I will argue that compact nuclear SMBH binaries are typically surrounded by dense gas, and discuss the coupled dynamics of a SMBH binary with a circumbinary gas disk.  I will show that the gas disk can extract the binary's orbital energy and angular momentum, and promote its inspiral to small separations.  I will also discuss the expected characteristics of EM emission from such a system, which differs markedly from the emission of a solitary SMBH.  In particular, the binary's emission is highly time-variable, and contain unique spectral signatures, which should aid in their identification.  A handful of quasars have recently been identified with periodic optical variability on the timescale of O(year). I will comment on the interpretation of these quasars as SMBH binary candidates.