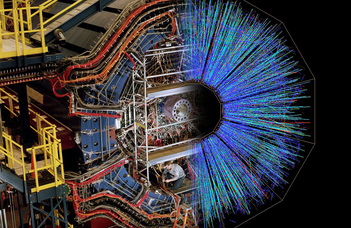 Our Universe is approximately 13.7 billion years old. It is filled by galaxies and clusters of galaxies. However, it didn't always look like that. The first stars and galaxies formed several millions of years after the birth of our Universe, the Big Bang. The matter in the Universe started to look like today's normal matter only after a few hundred thousand years after the Big Bang. Going back even further, to the first microseconds, we imagine a new type of matter filling the Universe, where the degrees of freedom are carried by quarks, the building blocks of protons and neutrons (which in turn build up atomic nuclei today). The Relativistic Heavy Ion Collider (RHIC) recreates and investigates this new type of matter, by colliding nuclei (heavy ions) at relativistic speeds (very close to the speed of light). In the RHIC complex, there are two accelerator rings crossing each other in six points, and there were detectors built around four of these - detectors having different capabilities and focuses, so that we can answer the widest possible range of questions with the RHIC experiments. Our group here at the Eötvös University is member of the two large experiments: PHENIX and STAR. Mate Csanad, associate professor at the Eötvös University, is the leader of the PHENIX-Hungary and STAR-Hungary groups. Goal of these groups is the investigate the phases of the matter created in relativistic heavy ion collisions, with experimental and phenomenological methods. Our tasks and projects range from measuring femtoscopic correlations through detector development/operations and data taking to shift coordination.