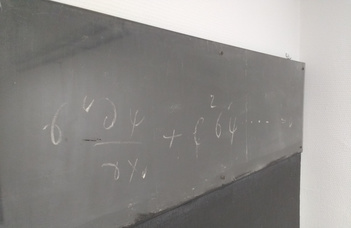 Our Department has a unique computing facility: 350 PC-s are connected together to form "Poor Man's Supercomputer" which is used extremely succesfully in large scale QCD simulations. Also, in spite of being an Department of Theoretical Physics, we actively take part in the running of the von Kármán Laboratory of the Department devoted to studies in fluid dynamics.

Photo: the "world equation" of Werner Heisenberg written on a blackboard of the Department during his visit in 1964.